Dr. Walker is an official NS Design electric violin artist, and has recorded on the Albany, Centaur, CRI, Orion, and Leonarda labels. His Bad Rap for Electric Violin and Chamber Orchestra is published by Keiser Music, and his Rock, Pop and Hip Hop Fantasies for Two Violins was published in 2016. His 2006 release of Electric Vivaldi on Newport Classics was hailed by the Colorado Springs Independent as the work of “a dangerous musician worth checking out;” the Detroit Free Press called him “wacky, yes, but strikingly effective at times;” and, the New York Times has praised him as an “excellent soloist.” Dr. Walker served for many years as Concertmaster of the Boulder Philharmonic Orchestra. He currently teaches at University of Colorado/Denver, and is the Artistic Director of the Colorado NeXt Music Fest.

A native of Taiwan, pianist Hsiao-Ling Lin enjoys an active performing career as a soloist and chamber musician in the US, Europe, Asia and Russia. She has played in a number of prestigious halls including Rachmaninoff Hall in Moscow, the Weill Recital Hall at Carnegie, Jordan Hall and the Isabella Stewart Gardner Museum in Boston, Harvard Musical Association in Cambridge, Chicago’s Symphony Hall, the Hong Kong Performing Arts Center, and Munich’s ARD Radio Station. She regularly performs live on radio broadcasts from WGBH Boston and WFMT Chicago. As a featured soloist, Ms. Lin has performed Ravel’s Piano Concerto in G and the Schumann Piano Concerto with the Northwestern University Orchestra in Evanston, and, with the Salt Creek Chamber Orchestra, Beethoven’s Piano Concerto No. 1 and Triple Concerto.

Hsiao-Ling Lin has been a member of the keyboard faculty at the University of Colorado-Boulder since 2011. She earned her Doctor of Musical Arts Degrees in Piano Performance and Collaborative Arts at Northwestern University, where she won the first prize in the Thaviu-Isaak Solo Piano Competition. Additionally, she holds degrees from the New England Conservatory and DePaul University, where she studied with Victor Rosenbaum, Irma Vallecillo and Eteri Andjaparidze. As a chamber musician, Hsiao-Ling has performed with Lynn Harrell, Matt Haimovitz, Carol Wincenc, and members of the Takács String Quartet, Tokyo String Quartet, Parker String Quartet, New York Philharmonic, Boston Symphony Orchestra, Chicago Symphony Orchestra and Colorado Symphony Orchestra.

During the years 2009 to 2012, she toured with the Core Ensemble, a multicultural chamber music/theater company that performs and teaches in colleges and universities throughout the United States. Her upcoming engagements include performances at the University of Colorado with members of the Takács Quartet. The HelloStage label has recently released her recording “UNITED”, with trombonist Peter Steiner of the Vienna State Opera and Vienna Philharmonic, currently available on iTunes.

Sarah Davis Eaton has been hailed by the Boston Globe as having a “clear and characterful soprano” and “assured musicianship.” Ms. Eaton has made solo appearances with Des Moines Metro Opera, Utah Festival Opera, Longwood Opera, ALEA III, Maine Grand Opera, New Music Ensemble Boston, and CU Opera, among others. Sarah currently serves as Vice President in charge of Auditions for the Colorado-Wyoming Chapter of the National Association of Teachers of Singing. She teaches voice in Louisville and Denver, and serves as soprano soloist and Children’s Choir Director at Central Presbyterian Church in Denver.

A native of Boulder, Colorado, Tony received his Bachelor Degree in Voice Performance and Musical Theatre from the University of Colorado. Recent roles include Superintendant Budd in Albert Herring, Massetto in Don Giovanni, Sam inBlue Monday, and Guccio in Gianni Schicchi with CU Opera, and ensemble in Rigoletto with Opera Colorado. In March, Tony premiered a new operatic work by Boulder composer Daniel Kellogg about the Alfred Packer story called, “Packer.” Tony currently serves as Director of Music Ministries at Risen Savior Lutheran Church in Broomfield. After having sung the Baritone solos with the BSO in Brahms’ Ein Deutches Requiem in 2011, Tony is excited to be rejoining the BSO for Mozart’s Coronation Mass.

Mezzo Soprano Amanda Lucarini has been noted for her “deliciously plummy sound” (Examiner.com) that is “absolutely remarkable and superb” (Opus Colorado). She regularly performs as a soloist, professional chorus member and section leader of the internationally acclaimed ensemble Ars Nova Singers. She is also a regular soloist, chorus member and women’s ensemble director at Beth Eden Baptist Church in Wheat Ridge, CO. Other recent solo work in Colorado includes performances of Handel’s Messiah and guest performances with University of Colorado choral ensemble. Her opera and musical theater roles include Marcellina in Le Nozze di Figaro, 1st Lady in The Magic Flute, Guenevere in Camelot, Edwin Drood in The Mystery of Edwin Drood, and Lucy in You’re a Good Man, Charlie Brown.

Ms. Lucarini’s primary musical occupation and passion is music teaching. Currently, she is the vocal music director of The Pinnacle Charter School, and has taught vocal music at Thunder Ridge Middle School in Centennial, CO and Danville Schools in Danville, OH. She also runs a private voice studio and directs youth theater productions. She holds a Bachelor Degree in Vocal Music Education from Cedarville University of Ohio and a Master’s Degree in Vocal Performance and Pedagogy from the University of Colorado in Boulder. While a student, she performed in master classes conducted by internationally renowned soprano Elizabeth Hagedorn, Met Opera baritone Jubilant Sykes, and musical composer Jerry Herman.

Steve has spent the last 6 years working as a professional opera singer. His career has afforded him the opportunities to sing with such prestigious opera companies as Des Moines Metropolitan Opera and Sarasota Opera. He has also performed with Spotlight Opera, the Metropolis Opera Project, the New York City Fringe Festival, and multiple other organizations and ensembles. Though the bulk of his performing experience is operatic, Steve also enjoys performing art song, musical theatre, a cappella music, and pop. Steve currently teaches private voice at the Dana V Music Studio in Louisville, CO.

Belinda Nooner is a native of Arkansas and attributes her love of music to her father who is a retired Trumpet and Jazz Director from the University of Central Arkansas.

While her formal degrees are in Physics, BS from UCA and an MS from Ole Miss, she minored in music and performed extensively at both schools. As an undergraduate she was one of the founding members of the Conway Symphony and a member of the International Horn Society. Upon graduation from Ole Miss, she pursued a career in teaching high school physics but also returned to the Conway Symphony and became a charter member of the Arkansas Horn Club. She also served as Brass and Choral Director at her home church.

Upon moving to Colorado in 2002, Belinda became the Music Director at Risen Savior Luther Church and served as it’s Choir, Brass and Praise Team Leader until those positions could be filled on a more permanent basis. She also joined the Broomfield Civic Orchestra in 2002 and contributed to its rebranding as the Broomfield Symphony as a member of its Board of Directors since 2007 where she currently serves as Vice President and Principal Horn.

When Belinda and her husband Rick are not performing with the Broomfield Symphony, they enjoy gardening, beer & wine making, and spending time in the mountains.

A transplant from Idaho, Jason Olney has lived in Colorado for the last five years and has developed a studio that spans the Front Range. Jason is the principal clarinetist with the Longmont Symphony, the Mahlerfest Orchestra and the Broomfield Symphony. He has also worked with many other groups throughout the front range, including the Colorado New Music Ensemble and the Boulder Opera. He has studied with Dan Silver, Shandra Helman and John Masserini and has degrees from Idaho State University and the University of Colorado in Boulder. He currently lives in Northglenn, with his dog and his house plants. 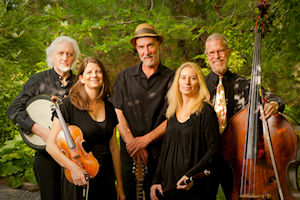 Authentic, Joyous Irish Music…. traditional with a touch of chamber music and music hall,Colcannon plays Irish music with panache, warmth and wit. Timeless songs and great musicianship transport the audience to another time and place. Colcannon is equally at home on the stage at a folk music festival or performing with a symphony orchestra.

The band formed in 1984 in Boulder Colorado, USA, and their reputation has grown steadily over the years with the release of eight CDs on the Oxford Road Records label. The band’s recent CD ‘The Pooka and the Fiddler’ received a Parent’s Choice Award for its artful interweaving or music and storytelling. The Emmy®-award winning PBS special, “Colcannon in Concert,” filmed at the Denver Center for the Performing Arts has aired nationwide. 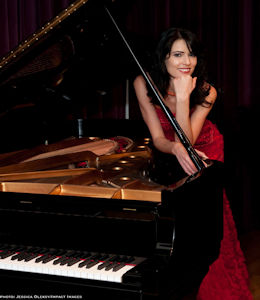 The opening concert of the season featured Katie Mahan performing Beethoven’s Piano Concerto No. 5 popularly known as the “Emperor Concerto” and was a sell-out success.
Katie’s life has always been filled with music, and at the age of four she decided that she wanted to be a concert pianist. She subsequently began piano studies with her mother, Bobette Mahan, and gave her first solo recital two years later at the age of six.

Katie studied with the celebrated French pianist, Pascal Rogé — who traces his musical heritage directly back to the great French tradition of Debussy and Ravel — emphasizing the music of Claude Debussy and Johannes Brahms. Katie was a protégé of the late Howard Waltz, himself a pupil of the legendary French pianist Robert Casadesus, and has participated in master classes by such musicians as Lang Lang, Simon Trpceski, and Michel Béroff. She has also studied with pianist-conductors Daniel Lipton in Germany and Robert Ward in Austria, and graduated with highest honors from the University of Colorado College of Music where she was a full-tuition scholarship student of Robert Spillman.as aired nationwide. 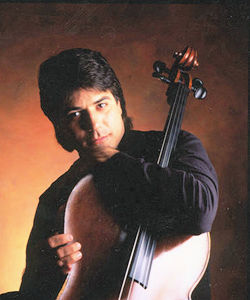 Jeffrey Watson was our featured soloist at the opening concert for the 2012 – 2013 season. Jeffrey performed Dvorak Cello Concerto to a sell-out audience at the Broomfield Auditorium. The Broomfield Symphony would like to thank Jeffrey for his wonderful performance.

Jeffrey Watson grew up in Tucson, AZ. He received a Bachelor of Music degree at the Hartt School of Music in Hartford, CT and a Masters degree from the University of Southern California in Los Angeles. Some of his teachers have included Raya Garbousova, David Finckel, Gabor Rejto, and Eleanor Schoenfeld.
After leaving school, Jeff spent 3 years with the Honolulu Symphony Orchestra before moving to the San Francisco Bay Area. Jeff joined the San Francisco-based New Century Chamber Orchestra (a conductorless 17 member string ensemble) in 1995 and appeared with the NCCO as chamber musician, principal and section cellist, and as soloist. The NCCO recorded 4 CD’s; one of which, an all Shostokovich CD, was nominated for a Grammy award in 2000. Some of the artists Mr. Watson has collaborated with include Charles Neidich, Terry Riley, Simon Rattle, Frederica von Stade, and Jeffrey Kahane. Mr. Watson re-located to the Denver area in spring 2006.

Katie studied with the celebrated French pianist, Pascal Rogé — who traces his musical heritage directly back to the great French tradition of Debussy and Ravel — emphasizing the music of Claude Debussy and Johannes Brahms. Katie was a protégé of the late Howard Waltz, himself a pupil of the legendary French pianist Robert Casadesus, and has participated in master classes by such musicians as Lang Lang, Simon Trpceski, and Michel Béroff. She has also studied with pianist-conductors Daniel Lipton in Germany and Robert Ward in Austria, and graduated with highest honors from the University of Colorado College of Music where she was a full-tuition scholarship student of Robert Spillman, as aired nationwide.