This opera, based on events in the life of the second-century Roman Emperor Hadrian, was intended for a 1792 première at the Paris Opéra. French Revolutionary authorities were troubled by the title character’s implied association with the freshly deceased Holy Roman Emperor Leopold II, and the perceived threat of Leopold’s Empire to the new revolutionary government. To complicate matters, it was rumored that the horses intended for onstage appearance during the Act I triumphal march were from the stables of the unpopular Queen Marie-Antoinette, the late Emperor’s sister. The librettist, François-Benoît Hoffman, refused to revise his text, citing both the1791 law lifting official censorship of French theatres and the 1789 Declaration of the Rights of Man. Over the strenuous objections of the Opéra administration, which had invested heavily in the new production, the political authorities banned the opera to prevent a possible riot. Adrien finally had its première at the Opéra on 4 June 1799, in a revised production (rehearsed under the supervision of the Minister of Police) that demoted Hadrian to the rank of general and cut the triumphal march. Contemporary critics hailed the work as a masterpiece; however, members of the ruling Council of Five Hundred were troubled by the title character’s implied association with Napoleon Bonaparte, and Minister of the Interior Lucien Bonaparte forced the opera’s removal from the stage after only four performances. 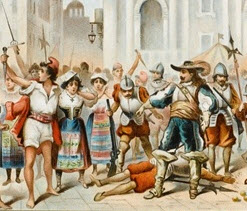 This work, based on the 1647 Neapolitan revolt against the rule of Habsburg Spain, is considered the earliest example of French Grand Opera. It was first given at the Paris Opéra in 1828, and was revived in Paris shortly after the July Revolution of 1830. On 25 August 1830, a performance in Brussels at the Théâtre de la Monnaie was met with an audience riot during the patriotic and revolutionary duet Amour sacré de la patrie. That same evening, the Belgian Revolution against the United Kingdom of the Netherlands began as crowds left the theatre and rioted in the streets, smashing windows, occupying factories and destroying industrial machinery. Richard Wagner, in his 1871 Reminiscences of Auber, noted that the opera, “whose very representation had brought [revolutions] about, was recognized as an obvious precursor of the July Revolution, and seldom has an artistic product stood in closer connection with a world event.”

Ruggero Leoncavallo, Are You There? (opera):

London, 1 November 1913. Leoncavallo, best remembered as the composer of the 1892 verismo masterpiece I Pagliacci, wrote the score for this brief English-language musical farce. The production team had hoped to repeat the previous year’s London success of Leoncavallo’s opera Zingari, but the opening-night audience at Are You There? was so disappointed with the performance that they responded with loud booing. The producer, Ned Wayburn, was reportedly dragged to the stage, where he tried unsuccessfully to address the jeering crowd. Wayburn told the audience that they were “unable to appreciate a real novelty.” The incident was reported in the Atlanta Constitution of 1 December 1913 under the headline, “Production So Bad That The People Wanted To Wreck Prince Of Wales Theater.”