Beethoven’s Opus 47 A Major Violin Sonata (“Kreutzer”) acquired its title as a result of a falling-out between the men who gave the work its first performance. Beethoven originally dedicated this particularly grand sonata to the celebrated English violin virtuoso George Polgreen Bridgetower (1780-1860), who came to Vienna in 1803 and greatly impressed the composer with his playing—so much so that, during their première of the sonata before a distinguished audience, Beethoven leapt up from the keyboard to embrace Bridgetower after the violinist executed a particularly brilliant improvised passage. Later, over drinks, Beethoven became enraged at Bridgetower’s casual off-color remark about a young lady of their acquaintance. Despite the violinist’s apologetic pleading, Beethoven insisted on changing the sonata’s dedication to Rudolphe Kreutzer (1766-1831), considered to be Europe’s most accomplished violin virtuoso. Kreutzer, then living in Paris, had met Beethoven in Vienna in 1798, but the two had never performed together. Upon receiving the rededicated manuscript, Kreutzer declared the sonata bearing his name to be unplayable, and never once performed it. Bridgetower eventually returned to London, where he died in poverty in 1860. 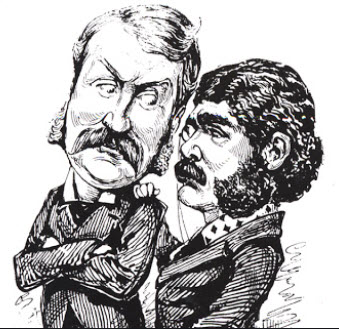 The fourteen stage collaborations of librettist William S. Gilbert (1836-1911) and composer Arthur Sullivan (1842-1900) include some of the most popular English-language musical theater works of all time, including the operettas H.M.S. Pinafore, The Pirates of Penzance, and The Mikado. Though the partnership was fruitful, the two men were often in artistic disagreement, with each openly critical of the other’s efforts, and each somewhat resentful at having to mold his work to the other’s conceptions. Gilbert, who survived Sullivan by eleven years, later referred to him as “a composer of the rarest genius,” and wrote that “the most cordial relations existed between us.”

Of the fifteen operas of Richard Strauss, six (including Strauss’ most famous opera Der Rosenkavalier) feature librettos by the great Austrian poet and playwright Hugo von Hofmannsthal (1874-1929). As Hofmannsthal found it too uncomfortable to be in the presence, or even the vicinity, of Strauss’ famously difficult wife Pauline, a significant portion of the partners’ collaboration was conducted by mail, with each sending the other musical or dramatic sketches for comment and revision.

The country-blues duo Sonny Terry (harmonica) and Brownie McGhee (guitar and vocals) performed and recorded together from 1939 to 1982, including European tours, a 1960 State Department tour of India, and appearances at major festivals and venues worldwide. For the last few decades of their collaboration, the two men were known to have been personally at odds, and, finally, not even on speaking terms. Eventually, they were together in the same place only while on stage or in the recording studio.

Like many of his musical contemporaries, the noted Austrian conductor Herbert von Karajan (1908-1989) joined the Nazi Party in the 1930s, and partly for that reason was allowed by the ruling authorities to continue working in Germany, Austria and occupied Europe during the war years. In 1946 he was cleared by the Austrian denazification examining board, and continued his international career. In 1956 he led a tour of the United States with London’s Philharmonia Orchestra. The tour’s last stop was in Baltimore, where a demonstration against von Karajan took place outside the concert hall. Members of the Philharmonia were already disgruntled by the conductor’s imperious manner during rehearsals and by what they felt to be his insensitive behavior in performances: Often he would bow only once or not at all at the conclusions of the concerts, without acknowledging the players or the audience, and would refuse to return to the stage for curtain calls or encores; and, at the beginnings of concerts he would conduct the British and American National Anthems in what the players considered to be too casual a manner. At an early-morning rehearsal in Baltimore, von Karajan arrived late. Violinist Peter Gibbs, who had served as an RAF fighter pilot during the war, reportedly demanded an apology from the conductor, addressing him in part as follows: “I did not spend four years of my life fighting bastards like you to be insulted before our own Allies as you did last evening.” The rehearsal proceeded without incident, but during the intermission of that evening’s concert, von Karajan refused to return to the stage without written assurance that Gibbs would be immediately sacked. The concert eventually resumed with conductor and all musicians present, but neither Gibbs nor von Karajan ever appeared again with the orchestra. After the Philharmonia arrived back in London, they received a letter from von Karajan’s lawyer in Vienna demanding a letter of apology signed by every member of the group. The players decided instead to send the conductor a Christmas card.

At a performance by the New York Philharmonic in April of 1962, conductor Leonard Bernstein took the unusual step of addressing the audience with a disclaimer, explaining that he was disassociating himself from piano soloist Glenn Gould’s interpretation of the Brahms First Piano Concerto they were about to perform together. Bernstein referred to Gould’s conception of the work as “unorthodox . . . in its remarkably broad tempi and its frequent departures from Brahms’ dynamic indications. I cannot say I am in total agreement with Mr. Gould’s conception and this raises the interesting question: ‘What am I doing conducting it?’ I’m conducting it because Mr. Gould is so valid and serious an artist that I must take seriously anything he conceives in good faith and his conception is interesting enough so that I feel you should hear it, too.” Gould is said to have thoroughly enjoyed the experience, especially the scattered booing from the audience. Speaking of this event twenty years later, the pianist remarked, “Soloists and conductors disagree all the time. Why should this be hidden from the public, especially if both parties still give their all?” He had withdrawn altogether from public performance in 1964.