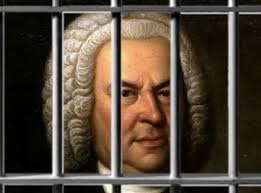 Johann Sebastian Bach spent most of November 1716 in a Weimar prison on account of a contract dispute. His noble employer, Duke Wilhelm Ernst, was angry at Bach for (among other things) accepting without his approval a better post in Cöthen with a rival noble employer (who happened to be the Duke’s brother-in-law), and the Duke imprisoned the composer in a vain attempt to prevent his departure for the new position.

In February 1810, while rehearsing his opera Silvana, Carl Maria von Weber (1786-1826) was arrested for embezzlement, along with his father Franz Anton von Weber, by order of King Frederick I of Württemberg. Although only the elder Weber was truly guilty of misappropriating funds from the King’s brother Duke Ludwig, Carl Maria had aroused the Duke’s anger by his impertinent attitude and questionable behavior while serving as his private secretary. Father and son were subsequently banished from the kingdom.

Ludwig van Beethoven was once arrested for vagrancy by a Viennese constable who mistook him for a beggar on account of his shabby clothes and unkempt appearance. He was released only after being positively identified as Beethoven by a musical colleague.

French conductor-composer Louis Jullien (1812-1860) served time in Paris in 1859 for unpaid debts brought on by the overextended financing of a production of his failed opera Pietro il grande at London’s Covent Garden, and by many other ruinous speculative ventures. Later, after he threatened to murder a young lady visiting his house, he was committed to an asylum in Neuilly-sur-Seine, where he died shortly thereafter.

In January of 1944, Igor Stravinsky was almost arrested by the Boston Police department for “tampering with public property,” after he opened a Boston Symphony Orchestra program with his own mildly unconventional arrangement of The Star-Spangled Banner. The police, having received complaints from audience members following the first performance of the concert series, arrived at the second performance to arrest Stravinsky for this violation of Massachusetts law. Alerted to their presence, the composer decided instead to perform a more traditional harmonization of the Anthem, and thus managed to avoid legal action. (Stravinsky had written the new version as a gesture of gratitude to the United States for granting him citizenship.)

Percy Grainger (1882-1961), Australian-born pianist and composer, was twice arrested for vagrancy by American police unsympathetic to his habit of dressing in shabby, unlaundered clothes.

Huddie “Lead Belly” Ledbetter (1888-1949), American folk and blues guitarist-singer-songwriter, was imprisoned on at least three occasions for homicide and other offenses. He won his freedom in 1920 by appealing in song to Governor Pat Morris Neff of Texas; and, in 1934, supposedly in the same manner, by appealing to Governor O. K. Allen of Louisiana, although the latter pardon was actually granted for good behavior.

In 1944 the Welsh singer-songwriter-actor Ivor Novello (born David Ivor Davies, 1893-1951) served four weeks in Wormwood Scrubs prison for the misuse of petrol coupons. The coupons had been stolen by a female admirer, but Novello was nonetheless found guilty of what was considered to be a serious wartime offense. The court was unimpressed by his claim that he needed the fuel for his Rolls-Royce to transport him between his country house and London, where he was supervising rehearsals for one of his musical shows. Novello’s case was further aggravated by the report that he had attempted to bribe the arresting officer.

Sidney Bechet (1897-1959), celebrated New Orleans clarinetist and saxophonist. During engagements with his ensemble in Paris in 1921, he was arrested after a passerby was shot in the course of an altercation with another musician. Details of the incident are incomplete, but as a result Bechet was jailed and later deported.

In early 1918, while serving in the French Army, Francis Poulenc (1899-1963) spent ten days in a military prison for overstaying his leave in Paris.

In November 1930, jazz trumpet legend Louis Armstrong (1900-1971) was arrested, along with drummer Vic Berton, upon being caught smoking marijuana in the parking lot outside Sebastian’s Cotton Club in Culver City, California. After spending the night in jail, Armstrong and Berton were released, and later given suspended sentences. It is conjectured that Armstrong was set up for the arrest by a rival club owner; and, that his light sentence resulted from the intervention of members of the politically connected Prohibition-era underworld. For most of his adult life, Armstrong smoked marijuana on a daily basis. During the Eisenhower Administration, he wrote a letter to the President calling for its legalization.

Sir Michael Tippett (1905-1998), English composer. In 1942-43, he served a sentence of three months in Wormwood Scrubs as a result of a dispute arising from his status as a conscientious objector.

Jack Purvis (1906-1962), noted American jazz trumpeter and trombonist. Served time for robbery in Huntsville, Texas, beginning in 1937. He was conditionally pardoned in 1940, but was soon returned to prison on a parole violation, for six more years. It is conjectured that Purvis intentionally sought re-incarceration, in order to return to leading and playing piano with The Rhythmic Swingsters, the prison band, which regularly broadcast on a local radio station.

Gene Krupa (1909-1973), American jazz and big-band drummer. In 1943, Krupa served 90 days in a county jail for “contributing to the delinquency of a minor” after San Francisco police, on their way to search Krupa’s hotel room, apprehended the drummer’s young valet, who was allegedly on his way to deliver to his boss a handful of marijuana cigarettes. In 1944, the California District Court of Appeals overturned a felony narcotics conviction, arising from the same incident, that could have sent Krupa to San Quentin for one to six years. During the felony trial, Krupa answered questions regarding the effect of marijuana on his drum tempos.