The Italian madrigal composer Carlo Gesualdo (1560-1613) murdered his wife and her lover upon surprising them together at his castle. Gesualdo escaped legal action on account of his noble status as Prince of Venosa.

The Italian composer Alessandro Stradella (1639-1682) was obliged to flee from Rome when he and a friend were found attempting to embezzle money from the Church. Stradella returned when he reckoned the heat was off, but eventually had to leave Rome again when he inspired the anger of various influential personages for his incautious affairs with women. While in Venice, Stradella served as music teacher to a certain nobleman’s mistress, with whom he became romantically involved, and the lovers eloped to Rome. The offended nobleman, determined to have his revenge, sent Venetian assassins after the pair; the story is told that the hit-men were so moved by a performance of Stradella’s music that they called off the murders and warned the composer to go into hiding. Following further attempts on his life in Turin, Stradella relocated to Genoa, where he at last fell victim to yet another hired killer, as revenge for yet another ill-advised dalliance. Stradella’s life is the subject of an 1844 opera by Friedrich von Flotow, and a 1909 American novel by F. Marion Crawford.

While serving as a music teacher in Arnstadt in1705, J. S. Bach was involved in a public brawl with a student, one Geyersbach, who called him a “dirty dog” in response to Bach’s reference to Geyersbach as a “nanny-goat bassoonist.” 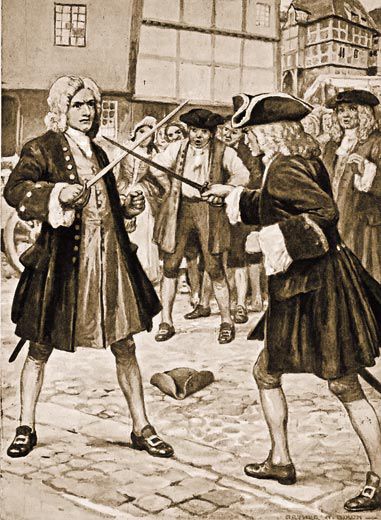 Händel was at the harpsichord in the orchestra pit during a 1704 performance of the opera Cleopatra, composed by Händel’s close friend Johann Mattheson. Mattheson, who was also singing the rôle of Antonius, left the stage following his character’s third-act suicide, went to the pit and attempted to take over Händel’s seat at the harpsichord. When Händel refused to surrender his position, Mattheson challenged him to a duel. As they fought, Händel’s life was evidently spared when Mattheson’s rapier struck a large button on Händel’s coat. The two men were later reconciled.
In 1722, in the course of a disagreement with the soprano Francesca Cuzzoni during a rehearsal of his opera Ottone, Händel picked up the lady by the waist and threatened to throw her out a window.

Ludwig van Beethoven, irate after being served the wrong entrée one evening at a Viennese restaurant, threw the entire dish and its contents at the waiter’s head.

While a student at the Paris Conservatoire, Hector Berlioz once got into a public row with the school’s director, the composer Cherubini, who chased him out of the school’s library after he had entered through the wrong door. Cherubini was further enraged at Berlioz for studying the scores of the composer Gluck, whose music Cherubini strongly disapproved of.

Berlioz’ gigantic opera Les Troyens was never given a complete performance during the composer’s lifetime. The opera’s second large section, consisting of Acts III, IV and V (The Trojans at Carthage) was first presented in Paris at the Théâtre-Lyrique on 4 November 1863, to a somewhat restless and unappreciative audience. In attendance was Georges Bizet (the composer of Carmen) who, defying the general sentiment of the crowd, loudly expressed his appreciation for Berlioz and his opera. A member of the audience holding a contrary opinion was the composer-conductor Victor Chéri, who later sent Bizet an insulting message which read in part: “. . . If you are unfortunate enough to shout for this Berlioz, your fetish, and to repeat your scandalous and ridiculous behavior, I shall regard it as a personal affront. And if you have a behind, I shall have boots! (And they won’t be soft!)” Recognizing this as a challenge to a duel, Bizet responded by having two of his friends present themselves to Chéri as his seconds. Chéri denied having anything to do with the original message, and no duel took place.

In 1839 Richard Wagner, while serving as Music Director of the opera company in Riga, Latvia, was forced to flee the city with his family to escape his creditors. (Wagner claimed that their rough sea voyage to London was the inspiration for his opera The Flying Dutchman.) In 1849, while living in Dresden, Wagner again departed in haste, this time to avoid arrest for his involvement in a revolutionary nationalist movement. One of the inspirations for his opera Tristan und Isolde was his infatuation (and possible love affair) with Mathilde Wesendonck, the wife of a wealthy Zurich patron who was kind enough to offer Wagner refuge at his estate. The conductor of Tristan’s first production was the eminent German musician (and Wagner’s ardent supporter) Hans von Bülow, with whose wife Cosima the composer also became romantically involved. After giving birth to three of Wagner’s children, Cosima left her husband and married Wagner in 1870. They remained together until the composer’s death in 1883.

Hans Rott (1858-1884), who had been a fellow-student of Gustav Mahler, was afflicted by mental illness for most of his short life. His compositions were championed by his teacher Anton Bruckner, and he is now considered a gifted and innovative composer. However, his music was criticized by many of his contemporaries including Johannes Brahms, who denied him any assistance or encouragement. In 1880, while traveling by train from Vienna to the Alsatian city of Mulhouse, where he had accepted a conducting position, Rott claimed that Brahms had filled the train with explosives, and threatened a fellow traveler (who had attempted to light a cigar) with a revolver. Rott was escorted back to Vienna, where he spent the rest of his life in psychiatric asylums.

Richard Strauss announced his engagement to the opera singer Pauline de Ahna shortly after a public disagreement with her during a rehearsal of his opera Guntram in 1894. (She threw her score at him from the stage as he was conducting in the pit.) The couple remained married from 1894 until Strauss’ death in 1949.

In November 1906, New York police charged the celebrated tenor Enrico Caruso (1873-1921) with an “indecent act,” alleging that he pinched a woman’s bottom in the monkey house of the Central Park Zoo. Caruso blamed the offense on one of the monkeys in residence, and it is speculated that the singer was unfairly entrapped by the offended lady and the arresting officer. Caruso was found guilty, and paid a fine of ten dollars.

Erik Satie’s ballet Parade, which includes music for typewriter and foghorn, had its scandalous premiere in Paris in May of 1917. Satie was given an eight-day prison sentence (suspended) for sending a rude postcard to one of his critics.

Arturo Toscanini (1867-1957), who began his professional career as a cellist, was fined, along with several other members of Milan’s La Scala pit orchestra, for deliberately poor playing on the evening of the 1887 première of Verdi’s Otello. Toscanini and his colleagues, feeling that Verdi was being insulted, were evidently expressing their contempt for the music of Manzotti, whose trivial ballet Rolla was performed on the La Scala stage immediately following the conclusion of Verdi’s tragic masterpiece.

In 1938, American pianist and bandleader Eddy Duchin (1909-1951) released his version of the Louis Armstrong tune Ol’ Man Mose on Brunswick Records, featuring vocalist Patricia Norman. This song contains the lyric “Mose kicked the bucket” and the repeated fragment “buck- buck- bucket” (imitating a chicken). The limitations of recording technology at the time allow more than one interpretation of the text: Many listeners are convinced that Miss Norman and the band are on two occasions using the vulgarism “f*ck it” in place of the original word “bucket,” while others maintain that the offending words are neither uttered nor intended. Presumably due to its notoriety, Ol’ Man Mose sold 170,000 copies and attained the number 2 position on the Billboard Charts. Following its release in Great Britain, the song was banned by the authorities. It can be heard on the 2006 CD “Beat the Band to the Bar,” a British compilation of American dance band novelty numbers. This recording also features She Had To Go And Lose It At the Astor (Harry Roy); Annie’s Cousin Fannie (Dorsey Brothers); So You Left Me For The Leader Of A Swing Band (Hal Kemp); I’m Looking For A Guy Who Plays Alto And Baritone And Doubles On A Clarinet And Wears A Size 37 Suit (Ozzie Nelson); The Yogi Who Lost His Will Power (Orrin Tucker); Sam, You Made The Pants Too Long (Vaughn Monroe); I Used To Work In Chicago (Sammy Kaye); and All Right Louie, Drop The Gun (Louis Prima).

In 1945, the noted Mexican operatic basso Ignacio Ruffino was cast as the Commendatore in a production of Mozart’s Don Giovanni at the National Opera of Mexico City. Ruffino left the theater following a rehearsal that ended unexpectedly early and went to a cinema, where he found his wife in the company of his best friend. The jealous singer fatally shot the man and was arrested, but was soon released on bail and was never tried for the crime. Public sympathy was said to be strongly on Ruffino’s side. He continued for some years in a successful operatic career, appearing onstage and in recordings with opera stars including Maria Callas, Mario del Monaco and Giuseppe Taddei.

Manuel Rosenthal (1904-2003), French-born composer and conductor, was serving as Music Director of the Seattle Symphony in 1951 when it was discovered that he and the soprano Claudine Verneuil, whom he had represented as his wife, were not actually married. (Rosenthal was still married to a French chorus girl, whom he had wed in 1927.) His contract with the Seattle Symphony, which he had led since 1948, was terminated on grounds of moral turpitude. Shortly afterward, Rosenthal officially divorced his first wife and legally married Mme. Verneuil, with whom he had two children.

During his residence in Australia in the 1950s, English conductor and composer Sir Eugene Aynsley Goossens (1893-1962) became acquainted with the Australian occultist and artist Rosaleen Norton, a practitioner of pantheistic neopagan witchcraft (Wicca) known for her grotesquely erotic paintings and drawings. Goossens (who was married at the time) began a love affair with Norton, the details of which became known to a Sydney Sun reporter who stole a number of compromising letters and photographs from Norton’s residence and handed them over to the Sydney police. In March of 1956 Goossens was detained at Sydney Airport upon returning from London. Customs officials found in his luggage a substantial amount of what was then considered to be pornographic material, including explicit photographs, books and film, in addition to rubber masks associated with sadomasochistic ritual. When confronted with the previously stolen evidence, for which he could have been charged with “scandalous conduct,” Goossens was compelled to plead guilty to bringing “blasphemous, indecent or obscene works” into the country, and was fined £100. He was forced to resign from his positions as Conductor of the Sydney Symphony and the Director of the New South Wales State Conservatorium of Music, and the affair effectively ended his international conducting career. The scandal inspired the 1990 novel Pagan by Inez Baranay; the 2003 documentary film The Fall of the House, directed by Geoff Burton; the 2004 play The Devil is a Woman, by Louis Nowra; and the 2004 opera Eugene & Roie, by Drew Crawford.

During his 41st birthday celebration in 1976, the celebrated American singer-songwriter-pianist Jerry Lee Lewis (b. 1935) accidentally shot and injured his bass player, Butch Owens, with what he thought (or so he claimed) was an unloaded pistol. (Owens’ own version of the incident involved a ricocheted bullet resulting from target practice on an empty soft drink bottle.) A few weeks later, Lewis was stopped by a security guard at the entrance to Elvis Presley’s Graceland residence in Memphis. The guard, unaware that the visit was at Presley’s invitation, grew suspicious when he saw a pistol (a gift from a local sheriff) on the dashboard of Lewis’ vehicle. The officer was further alarmed by Lewis’ drunken assertion that “I’m not here to kill Elvis, if that’s what you’re worried about.”