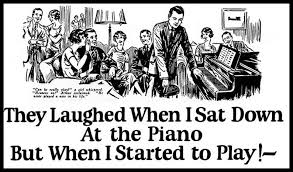 Possibly the most famous (and most parodied) piece of English-language advertising copy first appeared in 1926. A full-page magazine advertisement offered music instruction by correspondence course from the U.S. School of Music, under the headline “They Laughed When I Sat Down At the Piano But When I Started to Play!” The ad goes on to describe one (fictional) man’s experience of learning advanced keyboard technique despite having no musical background and no private instruction, and then astounding his friends with a polished rendition of the first movement of Beethoven’s Sonata No. 14 in C-sharp Minor, Op. 27 No. 2 (“Moonlight”). The copy continues at some length, as was customary at the time, and includes a vivid first-person account of the purported performance:

“Then I started to play. Instantly a tense silence fell on the guests. The laughter died on their lips as if by magic. I played through the first few bars of Beethoven’s immortal Moonlight Sonata. I heard gasps of amazement. My friends sat breathless–spellbound! I played on and as I played I forgot the people around me. I forgot the hour, the place, the breathless listeners. The little world I lived in seemed to fade–seemed to grow dim–unreal. Only the music was real. Only the music and visions it brought me. Visions as beautiful and as changing as the wind-blown clouds and drifting moonlight that long ago inspired the master composer.” [Editor’s note: This sonata acquired the subtitle “Moonlight” in 1832, five years after Beethoven’s death.] “It seemed as if the master musician himself were speaking to me–speaking through the medium of music–not in words but in chords. Not in sentences but in exquisite melodies . . . Forget the old-fashioned idea that you need special ‘talent.’ Just read the list of instruments in the panel, decide which one you want to play and the U.S. School will do the rest. And bear in mind no matter which instrument you choose, the cost in each case will be the same–just a few cents a day . . . If you are in earnest about wanting to play your favorite instrument–if you really want to gain happiness and increase your popularity–send at once for the free booklet and Demonstration Lesson.”

This ad, which continued to run for many years in national magazines, was created by a 25-year-old copywriter named John Caples, who died in New York in 1990 at the age of ninety. Caples, considered a pioneer of “direct-response advertising,” wrote a number of books on the subject, including the 1932 classic Tested Advertising Methods. He was elected to the Copywriters Hall of Fame in 1973, and to the Advertising Hall of Fame in 1977. The Caples Awards, given in his honor every year since 1978, recognize the achievements of successful marketers around the world.