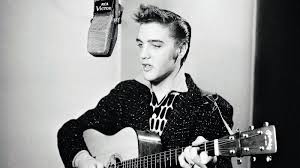 Frank Sinatra, in a 1957 article in the French magazine Western World, described rock and roll music as follows: “[It is] sung, played and written for the most part by cretinous goons and by means of its almost imbecilic reiterations and sly, lewd—in plain fact, dirty—lyrics, and as I said before, it manages to be the martial music of every sideburned delinquent on the face of the earth . . . this rancid-smelling aphrodisiac I deplore . . . the most brutal, ugly, desperate, vicious form of expression it has been my misfortune to hear.” Elvis Presley, in response, expressed admiration for Sinatra as a fellow-artist, but was said to have commented, “He’s mistaken about this.” In March 1960, upon his discharge from the US Army, Presley appeared on one of Sinatra’s television specials, “Welcome Home Party for Elvis Presley,” for the then-astronomical fee of $125,000. The two singers enjoyed a friendly collaboration for this event, harmonizing on “Love Me Tender” and “Witchcraft.”

After a number of unsuccessful attempts to meet Elvis, The Beatles arranged to visit him at his Bel Air mansion during their American tour in August 1965. They insisted that the meeting be kept private, without reporters, photographers or recordings. According to Paul McCartney, they found Elvis watching television and playing a bass guitar. “That was the great thing for me,” as McCartney later recalled, “that he was into the bass. So there I was, ‘Well, let me show you a thing or two, El . . .’ Suddenly, he was a mate.” In the course of the visit, the Beatles played billiards with some of Presley’s friends, met his wife Priscilla Presley, and John Lennon and Presley played some improvised duets. Some years later, in the course of his correspondence and meeting with US President Richard Nixon, Presley advocated for the Beatles’ banishment from American venues, denouncing them as immoral drug users. McCartney later commented, “I felt betrayed by that.”

In 1971, the American singer-songwriter Alice Cooper (born Vincent Damon Furnier, 1948) met with Elvis when they were staying in the same Las Vegas hotel. In an interview with the British newspaper The Daily Mirror, Cooper recalled, “He had the penthouse – this was when he was at the top of his game. I had always been a fan as a kid, so I jumped at the chance to go upstairs and meet him. When I got to the lift I found it was me, Liza Minnelli and the porn actress Linda Lovelace.” The group was frisked for firearms before being granted entry. “I don’t know why they bothered,” Cooper said, “when we got inside the place was full of guns. Elvis took me into the kitchen, opened a drawer, and pulled out a loaded pistol, telling me to put it to his head. I recognized it straight away, a snub .32. I didn’t know what to do. I had this gun in my hand and was expecting one of his security to come in any second, see me holding a weapon and shoot me dead. A little voice in my left ear was telling me, ‘Go on, this is history, kill him, you’ll always be the guy who killed Elvis.’ In my other ear was another voice saying, ‘You can’t kill him, it’s Elvis Presley – wound him instead, you’ll only get a few years!’ A fraction of a second later Elvis did a flying kick on the gun, and sent it flying, before tripping me and pinning me to the ground by my neck, announcing, ‘that’s how you stop a man with a gun.’” Presley had been learning karate techniques, and was eager to show them off to visitors.

In 1972, Led Zeppelin founders Robert Plant and Jimmy Page met with Elvis at his hotel suite in Las Vegas. Elvis was reportedly familiar with only one of their songs, Stairway to Heaven, but was especially troubled by the group’s reputation for riotous living. The music critic Cameron Crowe, writing for the British newspaper The Daily Telegraph, described the meeting as initially awkward and short on conversation. Elvis eventually asked them, “Is it true, these stories about you boys on the road?” Plant, with a straight face, said, “Of course not–we’re family men. In fact, I get the most pleasure out of walking the hotel corridors, singing your songs.” Plant then offered his best Elvis impersonation with the country song Love Me. The ice was then broken as Elvis and his bodyguards burst out laughing.