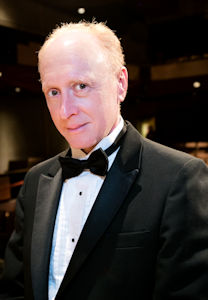 Broomfield Symphony Music Director David Brussel has been with the BSO since 2009. He currently serves as Music Director at Scott United Methodist Church in Denver’s Park Hill and has directed productions by a number of local orchestral, choral, theatrical and operatic ensembles. David played horn with the Colorado Symphony Orchestra from 1982 to 2018, and is an active freelance performer on horn and piano in the Denver area.

He holds degrees from the Oberlin Conservatory and Northwestern University and has taught at the University of Georgia, Metropolitan State University, and Colorado State University. His published works include two sets of art song and opera aria transcriptions for horn and piano and a book of truly arcane musical trivia. You can hear him on piano at a number of venues in the Denver area, including the Mercury Café.