About the Broomfield Symphony Orchestra

The Broomfield Symphony is a friendly, lively, and ambitious group of musicians. We perform concerts within Broomfield, Colorado. Our members are non-professional musicians from all walks of life who donate their time and talents for weekly two-hour rehearsals and our five concert cycles each season from October through May. We provide the opportunity and members get the satisfaction of playing exciting and demanding works.

We are able to attract professional soloists of the highest calibre. We also encourage young talented soloists from the area to play with us through our annual Youth Concerto Competition for middle and high school students in the spring. In addition to our performances, we often assist in instrument “petting zoos” at Brunner House and Broomfield Days where children can learn about the various musical instruments in an orchestra. We like to bring the fun of music and playing instruments to as wide an audience as we can! 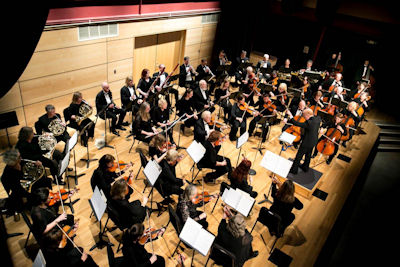 Our History
The Broomfield Civic Orchestra was formed by a few local musicians in the fall of 1981 to provide residents of the Broomfield area with the opportunity to participate in and enjoy performances of orchestral music, and to enrich the cultural life of Broomfield. As a self-governed, independent organization, the orchestra continues to prosper through the dedication of its volunteer musicians and partrons.

In 2011, the BCO adopted the Broomfield Symphony Orchestra trade name in recognition of the increased size of the orchestra and wider repertoire that the orchestra is performing.